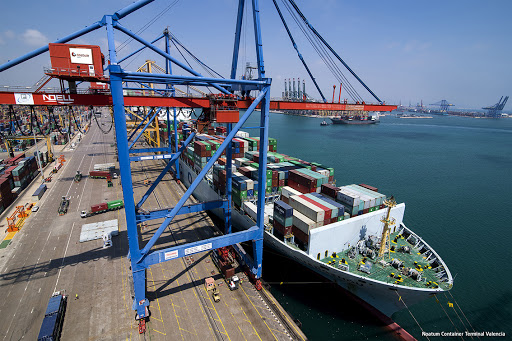 We have been awarded a strategic project for the Noatum Container Terminal Valencia, the container terminal with the biggest turnover in Port of Valencia and also one of the most important terminals in the Mediterranean.

Zeuko will be in charge of the engineering work for the Ship to Shore port crane heightening. This will facilitate the service of large container ships that operate in the terminal.

The crane structural heightening will be increasing its lifting height  in seaside 7.5 metres and its boom  by 4 metres. Zeuko's team will be doing the engineering work necessary for the previously mentioned modifications: the previous calculations and its reviewing with the finite element method (FEM), the analysis of the allowable stresses, the validation of static and dynamic resistances, or the determination of possible structure problems in the future or fatigue, amongst other tasks.

The engineering work to perform the crane heightening consists of different phases in which the crane needs to be dismantled from the base, lifted in order to place a wedge underneath to make it higher and, at the same time, elongate the boom. It is a complex operation, as it involves the difficulty of working with enormous and heavy structures that cannot be moved all together, hence the small amount of companies in the world able to do them.

One of the difficulties of this operation in particular, is related to the modelling of the structure. The latter has been achieved by combined 3D scanning techniques with the information that is provided in plans and documentation. The scanning technique generates a three-dimensional point cloud that, after computer processing, results into plans and solid elements that can be treated by the Finite Element Calculation Programmes (NASTRAN).

As an engineering company specialised in cranes, lifting and transport systems, Zeuko's team knows this type of work very well. Its expertise dates back to the late 90's and has collaborated with manufacturers and companies in similar projects. Some of Zeuko's previous clients in crane heightening have been the following operators: APMT, TCB and MSC.

For Zeuko, this is a big milestone in their trajectory.  According to Calixto Fernández, Zeuko's CEO, “There are barely 3 or 4 companies around the world able to do this type of work and, even though they might have a subsidiary here, they are all multinationals with their headquarters outside of Spain. It is the first time that a Spanish company has been awarded with a crane heightening engineering project of these dimensions, which is a milestone in the port sector.