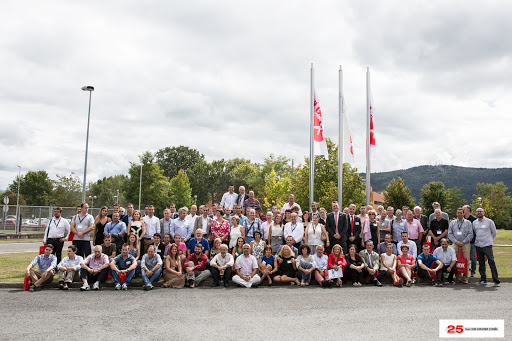 ZEUKO attends the commemoration of the 25th Anniversary of SEW ESPAÑA

SEW EURODRIVE España a Spanish subsidiary of the German multinational SEW EURODRIVE GmbH & Co KG celebrated this month the commemoration of its 25th anniversary in Spain and Zeuko attended the celebration event at its headquarters, located in the Scientific and Technological Park of Bizkaia.

In Zeuko we have worked with SEW in different projects, some of vital importance for us and our clients, and always with excellent results.

The origin of SEW-EURODRIVE Spain dates back to 1993, when the German company SEW-EURODRIVE decided to establish a subsidiary in Spain in order to distribute its products and be faithful to its motto "Think global, act local".

After attending the various events that were part of this anniversary, we highlight the intervention of the Director General of SEW EURODRIVE Spain, Juan Carlos Fdez. Dacal, who outlined the company's new plans, which it plans to take over the next five years out significant investments for its renewal and expansion in the Spanish market.

Later we had the opportunity to take a guided tour of the workshop to learn first-hand the assembly, repair and service process that takes place every day in the company. The visit, led by one of the company's internal sales staff, allowed us to see first-hand the internal process: storage area, assembly cells, quality control ... An interesting visit that culminated in a cocktail entertained with hand-held jazz music from the local group Cocktail Riders.

It was very interesting to know the future plans of SEW EURODRIVE and how it faces the assembly and manufacture of its products, products that we will surely continue using in future Zeuko projects.