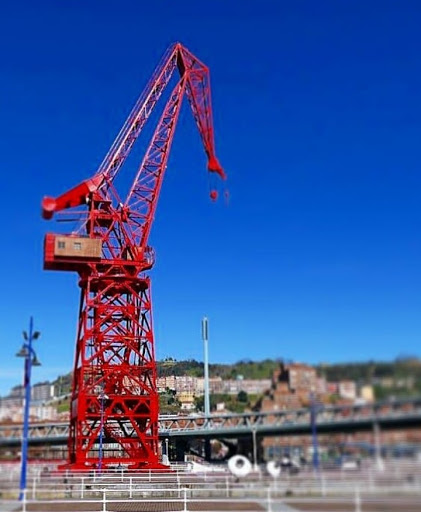 Zeuko, heiress of the Carola crane and the Hanging Bridge of Bizkaia

Zeuko, successor to the steel and lifting industry of Bizkaia, owns the original plans of the emblematic Carola crane manufactured in 1957 at the request of the Euskalduna shipyards.

In the same way Talleres de Zorroza, one of the companies that gave birth to Zeuko, participated in 1890 in the construction of the hanging bridge of Bizkaia.

Bilbao, in the 1950s, every morning a young woman named Geronima Carlota Iglesias Hidalgo, known as Carola, worker of the Hacienda de Deusto, crossed the Bilbao estuary in the gasolino, as the boat was called, to gain access to her job located in the Plaza del Sagrado Corazón. His blond hair and his bearing caused a stir among the workers of the Euskalduna company, who climbed to the crane to admire it and blew the sirens of the factory, pacing them in their path. The commotion was such that the director of the shipyards offered a vehicle to Carola to move him from home to his place of work to prevent production from being paralyzed. She refused and the situation continued until she became a legend and gave her name to the most famous crane in Bilbao.

The Carola or Karola is painted in red color full of magnetism, formerly painted gray, is a stork crane weighing 30 tons, with a height of 60 meters capable of lifting 60 tons, a mobile-type port crane that was used in the construction of boats for the Euskalduna shipyards. The crane was designed by Arturo Llorente Bodegas for Talleres Erandio S.A. and was built between 1954 and 1957, being active until 1984. The construction was made by rounded profiles joining the sheets that form the metal structure by screws heated to 900 degrees Celsius embedded with a mallet in its corresponding place. The main engine of 65 horsepower steam was made by the Bilbao company Elorriaga Industria Eléctrica of Zorrozaurre. It was the most powerful lifting machine manufactured in the state, the first to handle prefabrication and assembly work of blocks in steps that were installed in Bilbao. This powerful crane was placed at the head of the b1 stand and its job was to lift, move and flip the hull elements or machinery that had been made in the workshops to attach them to the ship.

The cockpit was located 35 meters above the ground and the quadrilateral at 60 meters. It moved on tracks to be able to move on the dock. In its route on these rails was a curve, causing the Carola to wiggle like the woman they saw every day, so they decided to baptize him with her name.

The Carola crane was in operation until the closure of Euskalduna, then it fell into disuse and was subject to vandalism until the Bilbao City Council acquired it in order to donate it along with the rest of the shipyard facilities, the dry docks and the shed of pumps, to the Provincial Council of Bizkaia to be part of the Ría de Bilbao Maritime Museum. Now it is located in the vicinity of the pump house and is the only crane that exists in Bilbao whose function was shipbuilding.

The Compañía Euskalduna de Construcción y Reparación de Buques (Astilleros Euskalduna) was founded in 1900, under the responsibility of Ramón de la Sota and Llano together with the main ship owners of Bilbao, a company located where the Euskalduna Palace is located today.

It consisted of three dams, the first was to build ships, the second to repair and the third was intended for larger ships. These dams were controlled by bombs, and the pump house that is preserved dates back to 1903.

The industry in Bizkaia followed a concordant pattern in all areas in terms of expansion and decline determined by the war periods of the time.

The World War I caused the production of shipyards and other industries to grow.

During the interwar period, however, they had to diversify their production opening to all kinds of metal constructions, such as vehicles, railways, etc.

During the Spanish postwar period, the difficult economic situation meant that production could not be developed due to the lack of raw materials and skilled labor. Until 1958 the production that was carried out in the 30s was not regularly surpassed.

From 1956, with the approval of the naval law and the support of the state administration to the shipyards, a sustained development of production was carried out, until the 1960s and 1970s, which were of enormous expansion and growth.

In 1969, Astilleros Españoles S.A. AESA through the merger of two Basque private shipyards, the Compañía Euskalduna de Construcción Naval and Sociedad Española de Construcción Naval (La Naval from Sestao) and the public company Astilleros de Cádiz. AESA was the largest shipbuilding company in Spain and one of the largest in Europe. The objective was to be able to compete with the construction of large oil tankers.

As of 1978 there was a decrease in production, this reduction was tried to avoid by specialization in medium-sized ships (bulk-carriers) and special ships festa (refrigerators).

In 1984 it was decided to close the Euskalduna factory opening a long process of resistance by workers who faced this eventuality with all available means at their disposal. In 1985 the activity was reduced to repair only, maintaining 200 workers, less than 10% of the workforce. Finally, in 1988, the facilities were definitively closed and the urban redevelopment of the area took place.

After its closure in 1988, the dykes, the Carola crane and the bomb booth were part of the Ría de Bilbao Maritime Museum and the office building, located in the central square of the Sacred Heart of Jesus, was occupied by several companies of all types. On the land occupied by the shipyard's facilities, the congress and music palace and the Euskalduna bridge were built, which we all know today.

In July of the year 2000 AESA dissolved, giving way with the company Nacional Bazán, to the Izar group.

The competition in the international market increased especially with the asian builders, Japan and South Korea that caused that the orders in the European shipyards fell, the entrance of Spain in the European Economic Community forced the sector to adapt to the community regulations and reduce gradually increase public support and open up the Spanish market to European competition.

In 1987 Talleres de Zorroza, created in 1871 and originally called Marinel-Lofreinke-Tous and Co., was a collective society with english origin with the aim of manufacturing mechanical and metallic structures, participated in the construction of the Bridge of Bizkaia, which took place since May 1890 to July of 1893. The board of the bridge is formed by a beam with St. Andrew crosses made in mild steel in Altos Hornos de Vizcaya and armed in the Talleres de Zorroza.

In 1901 it became a limited company and that's when it changed its name to Talleres de Zorroza. The high point of production was after the European war, due to the high demand. After several attempts of reconversion merged with J.J. Krug SA, Urbasa and Elyma, whose general director since the 1960s was Iñaki de la Sota Poveda, grandson of the founder of Euskalduna Ramón de la Sota and Llano, and in 1987 formed the company Saelmat SA for lifting, handling and transport.

Zeuko, was founded in the mid-90s belonging to the Mareiport group, is heir to the industrial tradition that began in the 50s with the conglomerate of a group of companies: Zorroza, Elyma, Urbasa, Krug and Omega, who give the name, and leads the industrial development in ports, shipyards and steel companies. It is consolidated as a reference engineering in its fields of action, while extending its offer to new sectors, hydroelectric, nuclear and cement plants that join those already present in its portfolio: ports, shipyards and nuclear, working under license of leading brands such as Demag, Liebherr, Krupp, Paceco or Man, accelerating the process of technology transfer.

Zeuko is currently in the process of growth and expansion, integrating new technologies into its solutions that increase the added value to our customers and honoring its past so linked to the steel industry of which we are so proud.